The answer to the question of who is coming out ahead in the apartment market – renters or landlords – has been fairly clear for a while now. Renters have rarely caught a break since many major markets began to recover from the Great Recession in 2010.

The recovery years of 2010-2016 saw rent growth rise 150 basis points (bps) above the long-term average, and renters only began to see relief from continual price hikes toward the end of last year. This year promises to show further declines in some markets where rents have risen the most. 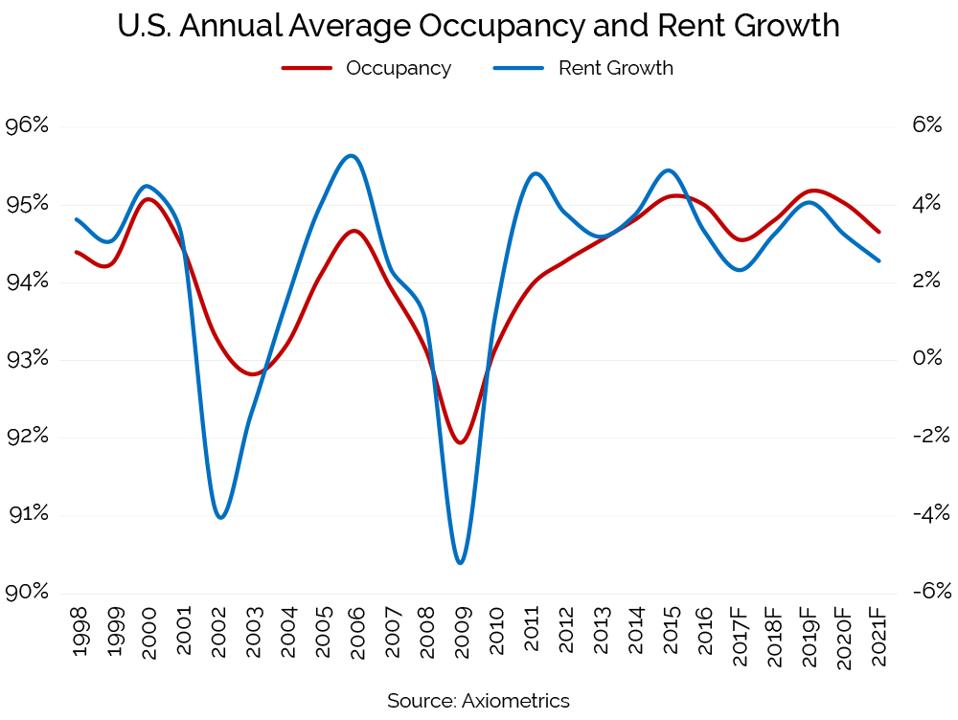 Though apartment renting is not a zero sum game, slower rent growth in 2017 is expected to benefit renters more than landlords. Nationally, during the last six years, the average annual rent increase was about $516. It’s expected to lower to about $347 in 2017, reflecting about $168 in savings annually.

The table below shows the top 10 metros with the largest expected savings in apartment rent during 2017 compared to the last six years. The projected savings for each market was calculated by subtracting the annual change for 2017 from the average annual change in rent from 2010-2016. Out of the 54 major U.S. metros analyzed, some 36 showed annual savings ranging from $8 to $2,647, with average decreases of about $360 from the average 2010-2016 price.

Also included in the analysis was a calculation of change in elasticity, which is a measure of how sensitive consumers are to price changes. In this case, greater or lesser degrees of elasticity reflect how renters react to changes in rent. Generally, housing is an inelastic product, which means that the change in price doesn’t substantially affect the quantity demanded.

For this analysis, the long-term average for elasticity was calculated and compared with 2017’s figure. If the elasticity value in 2017 is less than the historical average, it is said that renters are getting less sensitive to changes in rent and vice versa.

Bay Area: San Francisco, San Jose and Oakland, lead the pack for most savings in 2017. San Jose renters stand to pay $2,647 less a year compared to the 2010-2016 average rent, and annual savings will be $2,638 and $1,647 in San Francisco and Oakland, respectively, this year. These markets saw a substantial increase in rent during the last six years, often producing double-digit rent growth that was not sustainable over the long term. The positive change in elasticity value in 2017, compared to the long-term history, points to renters in these markets getting more sensitive to increases in price. The impact of new supply, combined with moderating job growth compared to the last six years, will lead to softer rent growth throughout 2017.

New York: Though New York renters stand to see substantially smaller savings than their counterparts on the opposite coast — about $630 a year — the positive elasticity value for the market indicates that they are more than ready for the decrease. Decelerating job growth and an increase in new supply in 2017 is expected to keep rent growth low this year.

Houston: Houston saw a larger impact on job growth from the drop in oil and gas prices, and continued weak employment numbers may be one reason that Houston renters show the highest sensitivity to price on this list. Houston residents will save about $509 this year, about half a month’s rent relative to the average effective rent in 2016. Though job growth is expected to pick up this year, it will most likely remain well below the metro’s capacity, keeping rent levels lower.

Denver: The Denver market’s performance slowed significantly last year, as rent growth returned to more sustainable levels after being in double digits for most of 2015. That should yield a savings of about $502 a year for Denver renters in 2017. New supply coming to market ramped up in 2012 and still has not slowed, with 3.6% inventory growth expected this year. Weaker job growth this year will mean that the new supply is absorbed at a slower pace, which will continue to keep rent growth at lower levels.

Boston: As with many markets on this list, increased new supply and slowing job growth will equate to lower levels of rent growth in Boston in 2017. Rent growth in the market has been varied since the start of the recovery, but slowed in 2016. Renters should see an annual savings on rent of $441 this year, as compared to annual average rent increases over the past six years.

Seattle: Though Seattle has not achieved the rent growth highs of the Bay Area markets, it also has not seen the same lows in the past year. While rent growth has recently dipped into the negative in Oakland, San Jose and San Francisco, the Seattle market’s performance in 2016 was still strong. Though renters in Seattle will see smaller savings than in other West Coast markets, about $407 a year, they will still get some relief from the rent hikes of recent times.

Portland: The combination of slowing job growth and increased new supply has also caused rent growth to decelerate in Portland, returning to more sustainable levels than the double-digit gains experienced in 2015 and early 2016. Portland renters will see about $356 in savings this year, though the lack of change in elasticity value in the market indicates less sensitivity to rent increases, as renters here may be getting used to paying higher rents than the long-term average.

Austin: Austin was among the markets experiencing the strongest job growth on this list, though that metric dropped in 2016 and will continue to moderate this year. With rent growth responding to the drop in demand caused by moderating job growth, Austin renters will see a break of about $323 in apartment rents. However, the negative change in elasticity value shows that renters in this market are much less sensitive to price changes than their counterparts in other markets. This may reflect the savings that Austin transplants are already seeing over their previous homes in more expensive coastal markets.

No matter how sensitive renters are to the change in price, there’s no disputing that having extra money in their pockets after rents are due will be a welcome change from the boom recovery years.